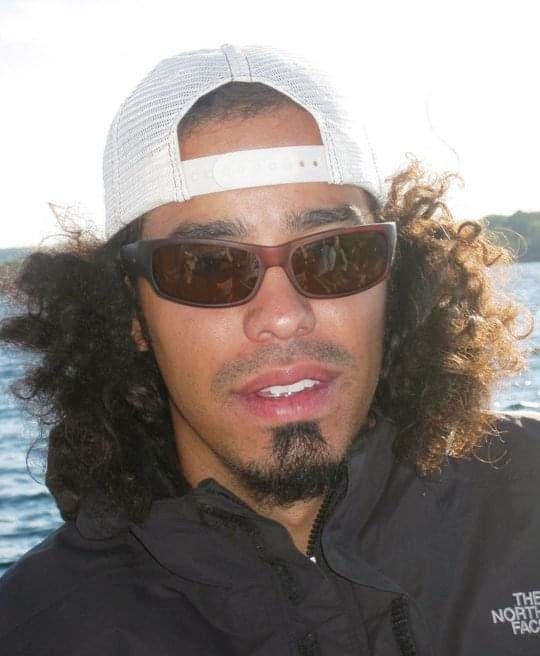 The universe received a beautiful soul on May 6, 2021, Andre Anthony Schnapp (age 38). Andre was born December 8, 1982 in Niles, Michigan, the son of Vernon Reynolds and Julia Schnapp.

Andre grew up in Grand Rapids, Michigan, where he attended Catholic Central High school from which he graduated in 2001.  He moved to Traverse City to be with his partner, and love, Allison Merrill in 2004, where they lived with Allison’s mother, Louann, (“Madre” as they affectionately called her) and brother, Cody, until 2011.

In 2011, their love of dogs and entrepreneurial spirit prompted them to purchase SunDog Kennel in Bingham Township.  The intentional devotion Andre embodied in his personal relationships carried over to the kennel, where he attentively cared for their client’s dogs, fostering a successful business alongside Allison.  They also gathered quite a family of personal dogs, including several Allison adopted, despite Andre’s opposition that later became “his”.

Andre loved the water and could often be found fishing or anchored at the “Sheppy” sandbar with his beloved canine friends in tow.  Andre’s warm smile and playful sense of humor lit up every room he entered, and his infectious laughter and intelligent conversation could bring it together.  Andre was also a natural born athlete.  Whether it was his prowess in baseball, garnering him attention from recruiters straight out of high school, or his 4 handicap on the golf course (“2 handicap on a good day” as he would say) or his explosion onto the disc golf scene as one of the area’s top players, or a run of strikes at the bowling alley.  No matter the arena, his nurturing competitive spirit, coupled with his easy mojo was revered.  Andre always made sure everyone was having a good time.  Perhaps his most natural ability though, was his knack for cultivating friendships.  He chose carefully where and with whom he spent his time, but also held a kind, respectful candor for any stranger.  Once he brought you into his fold, he never let you go.  Although headstrong and sometimes downright stubborn, his love for his friends and family was unwavering, always showing up at the right time and place to bring perspective, laughter, comfort, or simply joy.  Andre never said no to a friend in need, whether it was offering help with physical tasks, or simply being there when you needed to talk, even if that meant a late-night phone call that lasted into the wee hours.  His grounded presence had a way of making you feel safe and supported.

To know Andre, was to know unconditional love and he was loved in kind.  Although his family and friends grieve the passage of a beautiful soul, his story will live on in the hearts of many.

He is survived by his mother, Julia Schnapp; father, Vernon Reynolds; son, Aiden Patrick; life partner, Allison Merrill; and several aunts, uncles and cousins.  And an endless list of friends too numerous to name.

A second viewing in Grand Rapids will take place on Friday, May 14 at O’Brien Gerst Funeral Home at 3980 Cascade Rd SE, Grand Rapids, MI 49546 from 4 – 8 PM.  Recitation of the Most Holy Rosary will begin at 7:30 PM.  {To ensure the protection of our loved ones and prevent the spread of the coronavirus, all current COVID 19 protocols will be in place.}

A funeral mass will take place at 11 AM on Saturday, May 15 at Sacred Heart of Jesus Church, 151 Garfield Ave SW, Grand Rapids, MI 49504.  Andre’s cremated remains will be interred at St Mary Cemetery in Lake Leelanau at a later date.

In lieu of flowers, donations can be made to SunDog Kennel or to the Andre Schnapp Memorial fund at Northport Creek Golf Course.

Please share condolences with Andre’s family and friends at www.martinson.info or at www.gerstfuneralhomes.com,  Arrangements are with the Martinson Funeral Home and Cremation Services of Leelanau.