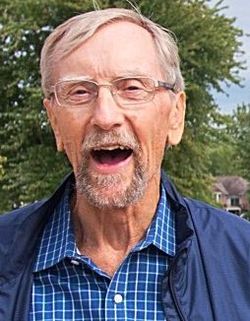 Our beloved Bruce Engle of Grand Rapids, MI passed away on Monday, December 5, 2016.

Bruce moved to Grand Rapids, MI from Westchester IL, this June, 2016. He was first diagnosed with bladder cancer in May of this year. Upon his move he was under the care of several doctors. After many procedures and 5 weeks in the hospital he was moved to Hospice. He fought hard to live his remaining life with dignity.Born in Battle Creek, Michigan on March 10, 1937, to James and Thelma (Snyder), Bruce spent his first seven years on his dad’s farm in Tekonsha, MI. until the death of his mother, Thelma. His mother committed suicide and that affected Bruce both negatively and positively for the rest of his life. His last career was as a Clinical Social worker for 14 years with The Loss Program of Catholic Charities in Chicago, Il. As a survivor of a family member’s suicide, he was well aware of the grief and suffering for survivors and helped many survivors deal with their pain and suffering.
Bruce graduated from St. Phillips High School in Battle Creek where he was a standout athlete in football, basketball and golf. He grew up caddying at Battle Creek Country Club where in 1955 he earned the first Chick Evans Caddy Scholarship from BCCC to attend Marquette University in Milwaukee, WI. He graduated with a degree in Philosophy. He also earned two master’s degrees, one in Criminal Justice from the University of Detroit and the other in Social Work from Loyola University in Chicago.
Bruce Engle was a proud Marine. He enlisted in the US Marine Corps Reserve in June of 1961 with his best friend from high school, Jim Reece. He received basic training in Paris Island, SC. He was then assigned to an engineering company in Camp Lejeune, NC for specialized training as a combat engineer. He also was Heavyweight Boxing Champion for his platoon. Jim Reece and Bruce were best friends for 66 years. The stories regarding their fun together are legendary and are best told with a glass of amber liquid in hand.
Bruce was a Sales Rep, Large Account Manager and a Lobbyist for Lederle Laboratories during his 28 years with the Company. After his retirement he worked for the Illinois State Treasurer working in community relations for ten years. At age 64, Bruce received his Master’s in Social Work from Loyola University. After serving an internship with Catholic Charities’ Loss Program, he was hired as a full time Social Worker working with survivors of suicide, which he did for 14 years until his retirement. Bruce was passionate about helping those who were survivors of suicide. During this time he also taught at Loyola University in their Master’s Program, teaching courses in Mental Health and Public Policy.Bruce loved golf and was great at it, shooting his age (79) several times this summer at Battle Creek Country Club. He caddied for Professionals, including Bob Toski, Chick Harbert, Gene Littler and legendary head Professional Ron LaParl. His rounds with brother Jerry and Jim Reece each year were filled with healthy banter and good times. Bruce also enjoyed many memorable rounds with his good friend and fellow Evans Scholar, Joe Arndt.
He is survived by his brothers Jerry (Janis), Steve, (Rachel) and Mike and stepmother Phyllis. He leaves behind four children, Arnold Bruce, Jr. (Carolyn) of Pomona, CA, Dina Tossberg of Pasadena, CA, Lisa Rando of Jackson, MI, Tracy Rana (Zubair) of Potomac, MD and grandchildren Jamie, Russell, Emily and Rosie Engle, Veronica and Fritz Tossberg, Nicole Randosmith (Brandon) and Kelley Rando and Kamran Rana, former wife Lucia Engle and her children Gabriella (Jay) and Michael, and others he considered his children, including Bobby and Joanie Tompkins and nieces and nephews.
Bruce will be missed by family, friends, co-workers, survivors of suicide and acquaintances.
He touched many people’s lives in a positive way.
Arnold Bruce Engle you will be missed but certainly not forgotten.
Per Bruce’s wishes there will be no memorial services.
In lieu of flowers Bruce would appreciate a donation to the Catholic Charities Loss Program or the Evans Scholars Foundation.