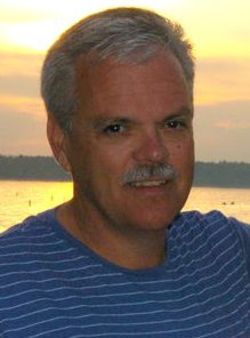 It seems like Brian walked off the golf course and into the hospital. After an unexpected and incredibly brief illness, Brian passed away from pancreatic cancer on September 25, 2017. He is survived by his wife, Teri O’Driscoll; his children: Shannon (Jay) Echols of Grand Rapids, MI, Justin O’Driscoll of Washington DC, and Erin O’Driscoll of Grand Rapids, MI; his grandchildren: Malana, Leyah, Shamari, and Jayonna. His brothers and sisters, Bill (Kathy) O’Driscoll of Onalaska, WI, Kathy O’Driscoll of Grand Rapids, MI, Patty (Doug) Callaway of Onekama, MI, and Brendan (Christine) O’Driscoll of Grand Rapids, MI;  father and mother-in-law: Steven (Beverly) Bailey, sisters -in-law: Patti (Larry) Foster, Pam (Bob) VanTil. Brian was born in Detroit, MI on December 18, 1958. H is Catholic education began at St. Stephens Elementary School and continued at Catholic Central High School. Brian was a quiet man around most people, but family and friends knew him best as someone who was quick-witted with a somewhat devilish sense of humor. He was our own MacGyver, using his ability to fix just about anything, build something he put his mind to, and analyze a situation logically. With a B.S. degree in Civil Engineering from Marquette University, Milwaukee, WI, Brian started his career in October 1985 as a draftsman at Couturier Iron Craft, Inc. During his career with the company, Brian progressed through detailing of structural steel and miscellaneous metals, and ultimately excelled at designing and drafting beautiful monumental staircases and railing systems which are installed throughout the United States. He showed his dedicated work ethic daily while using his engineering skills to run the CAD room at Couturier Iron Craft for 32 years. His drawings of one of a kind custom metal and glass stairs for corporate headquarters, universities, shopping malls, and private homes brought him years of satisfaction and pride. Learning to golf from his dad at a young age, Brian’s love of the sport grew over the years. Many of his Catholic Central friends were also golfers and laid the groundwork for 40+ years of competitive rounds of golf. He loved his time on the golf course with friends and family! Just a few weeks ago he was ecstatic when getting the best shot of his life (a blind shot out of a sand trap, resulting in an eagle) at Diamond Springs. Without a doubt, it was his children who always provided him immense joy. Whether it was watching Shannon “Mrs. Fix-It” work and raise a family, or Justin take up the love of travel and large city living, or in daily life with Erin, through sports and performance arts as a teenager, stretching her wings into adulthood — in any of their accomplishments, big or small, he found pride. Our grief and loss at losing a loving husband, father, grandfather, brother, uncle and friend, will be with us always. What will sustain and lift us are the invisible threads of family and friends who carry snippets of Brian’s life. May we continue to weave together these threads, these stories of a gifted and unassuming man, taken from us far too soon. Visitation will be Friday, September 29, 4-7:00 p.m. at O’Brien-Eggebeen-Gerst Chapel, 3980 Cascade Rd. S.E., Grand Rapids. The family will also meet with friends and relatives one hour prior to the service at the church. Mass of Christian Burial will be celebrated Saturday, September 30, 11:00 a.m. at St. Robert of Newminster Church, 6477 Ada Dr. S.E., Ada. Rev. Leonard Sudlik presiding. In lieu of flowers, memorial contributions may be given to: The Brian “McDivot” O’Driscoll Scholarship at Catholic Central High School.