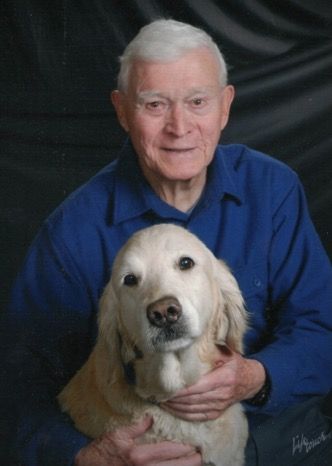 Charles Campbell Lundstrom “Charlie” passed away September 16, 2018, at the age of 88. He was born December 14, 1929, in Manistique, Michigan, the son of Elmer and Lucile  Lundstrom. Graduating from Manistique High School in 1947, he went on to Northwestern University, majoring in Business Administration and graduating in 1951. For the next three years he served in the U.S. Navy as an officer on the destroyer escort USS Snyder. Following his military service, he married and worked for two years in Schenectady, New York, for General Electric. In 1958, he graduated from the University of Michigan Law School and then joined the law firm of Warner, Norcross, and Judd of Grand Rapids where he practiced law until his retirement in 1994. He remained of counsel to the firm and a member of the Michigan Bar Association for the rest of his life. Charlie married Janice Beaubien in 1953, and they shared a wonderful life of travel and adventures with their three sons, Scott, Eric and Craig.  Upon retirement, Charlie and Jan divided their time between their Schuss Mountain chalet near Bellaire, Michigan and their home in Sedona, Arizona. They enjoyed skiing, tennis, golf and, especially, international travel. After Jan’s death in 2008, Charlie continued to travel, often with his dear friend Maria Tillotson. Health led Charlie to move back in Grand Rapids for the last three years, allowing him to reconnect with many close friends. Charlie loved his dogs and he usually had two. Any dog that he adopted, and he rescued many, could be sure of an idyllic life. In 1998, he established the Lundstrom Family Foundation to support animal welfare organizations- especially for dogs. Last year the foundation contributed to 22 animal care organizations. Charlie was predeceased by his parents; his beloved wife, Jan;  his three sisters, Dot Bays, Patt Davis, and Gail Morrow.  Survivors include his sons, Scott (Pam), Eric (Rita) and Craig (Lara); grandchildren, Erin (Kip), Kelsey (Shanzi), Lucy, Nina, Evan and Nate; great-grandchildren, Owen and Ella; along with many special nieces and nephews.  Charlie’s large, loving, close family and his extensive and caring circle of friends may be his greatest achievement.  He will be missed. A memorial service will be held at O’Brien-Eggebeen-Gerst Chapel, 3980 Cascade Rd SE, on September 26 at 6 PM with visitation from 4-6 PM. In lieu of flowers, Charlie asked that you consider giving to your local humane society.