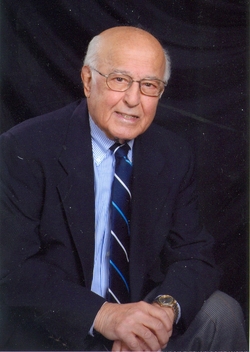 Clark John Afendoulis died peacefully, at home, on Wednesday, June 15, 2016, in the loving care of his family and with a heart full of faith and love.

He was a good, kind and loving man.

Born in 1928 to John and Stella (Gavrilides) Afendoulis in Grand Rapids, Mich., Clark was the youngest of nine children. His parents were Greek immigrants from the Black Sea town of Ordu, Turkey, where they became victims of the Greek genocide. His mother buried three of her four children on a death march from Ordu to Constantinople (Istanbul), after his father left Turkey for the U.S., to prepare for a new life for his family. They were reunited and moved to Grand Rapids, and his parents had five more children. Clark was the youngest of the children born in the U.S., and that history colored his life.

As a child during the Great Depression, Clark began working at the age of four, shining shoes on Monroe Avenue. He sold pop at the Armory and worked at the ice cream counter in the drug store on the Michigan Street hill, bell hopped at the Pantlind Hotel (now the Amway Grand Plaza), sold newspapers on Lafayette Avenue and Livingston Street, and did whatever else he could to help support the family.

He, his brothers and his cousins were well known at Central High School for their athleticism. Clark was a star player on the Central baseball, basketball and football teams and later played baseball for the Carvers and the U.S. Army when he served in occupied Japan. He pitched the winning game of his division championship in Yokohama and was offered the opportunity to play for the Chicago Cubs, but wanted to make his mother proud by being the first child in his family to get a college degree. He did.

Clark was a proud MSU alum, which he attended with his beloved cousin, Spiro Gavris, and a graduate of its then-new School of Hotel, Restaurant and Institutional Management. He had career in the hotel and restaurant industry (his first job was as beverage director for the Pantlind Hotel) and, for many years, was the proud proprietor of Mr. Clark’s Beefeater Room, which initially was located on Commerce Street where the JW Marriott parking lot now stands, and later moved to 28th Street. He closed the restaurant in the mid-1970s and went into club management before retiring.

Clark was a graduate of Grand Rapids Central High School and Grand Rapids Junior College, a life member of American Legion Post 451, past member of Grand Rapids Lions Club, Grand Rapids Variety Club, East Lansing Rotary Club, Past President of AHEPA (Holy Trinity) and Michigan Club Managers of America, and was in the Occupation Forces in Yokohama Japan during WWII.

Aside from golf and opera, his passions were his faith, his family, and reading (especially WWII history). He was an adoring husband, loving father, doting grandfather, loyal friend, faithful Orthodox Christian, funny old man and stubborn Greek. He enjoyed golfing his age into his early 80s, but adjusted graciously, if reluctantly, to a life without the sport.

Those who survive him will miss him terribly: his wife, Katie (Theodore), and their children and grandchildren: Lynn Afendoulis and her children, Katharine Zuiderveen and Evan Zuiderveen; Kristen and Gary Worthington and their children, Jaclyn and Lucas; Maria and Scott Gregory and their children, Patrick and Elisabeth, and his cousin Gus, who now is the lone survivor of the gang of four (Gus, Sam, Gust and Clark). He also is survived by his special cousins, Spiro and Rose Gavris, of Wellesley Hills, Mass. He was preceded in death by his parents; brothers George, Nick and Gust; sisters Ruth Van Huisen and Mary Richards; his three siblings who perished in Turkey (Athanasios, Mary and Afentouli) long before he was born; and his“brother,” William G. Reamon, whom he loved dearly. He also adored and greatly missed his cousins who preceded him in death, Sam Afendoulis, George Afendoulis, and Spike Gavrilides. We believe he is with them now and that gives us great comfort.

During one of his many trips to ER in the past month, he said, “I always thought I’d die on a golf course.” Sorry, Dad, but we needed you a little while longer and we’re glad you stayed. Enjoy that big, beautiful course and those perfect greens while you listen to Madama Butterfly and breathe without pain or effort. We’re so grateful you’re comfortable again, and that you’re in the light of our Savior Jesus Christ. We love you.

May his memory be eternal. Zois Isas!