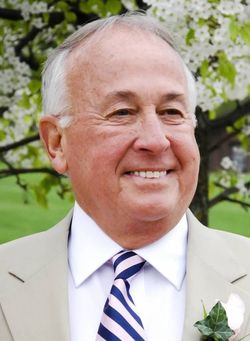 Dr. James Christopher Norman of Grand Rapids, age 75, passed away April 5, 2016 with his family by his side.  Known as Chris to his family and friends, he was born on October 19, 1940, the eldest of six children to James and Elizabeth Norman.  He was preceded in death by his parents, his sister Jane Norman, his brother Tom Norman, sister-in-law Maureen Norman and his in-laws, Jerome & Elizabeth Wieber. Chris is survived by his loving wife of 45 years, Shari and four daughters, Shannon Kotre (Steve) of Ann Arbor, Jennifer Brechting (Kevin) of Ada, Julie Kimmons (Rob) of Indianapolis and Brittney Norman of Bloomington, IN. He was a patient and tender Grandfather to Noah (15), Ethan (12) and Clare (9) Kotre; Brady (5) & Harper (4) Brechting; and Andrew (5) & Benjamin (3) Kimmons.  Also surviving are his brothers Pat Norman and Dan (Sally) Norman, sister Nan (Guy) Bailey, and in-laws Beverly (Ron) VanDyke, Anita (Brian) Weber, and Nancy (Bruce) Gregory, along with many nieces and nephews.  Chris graduated from Middleville High School in 1958, received his Bachelor of Science degree from Aquinas College in 1962 and his Doctor of Dental Surgery (DDS) from the University of Michigan Dental School in 1966. After graduating, Chris spent two years as a Captain in the Air Force serving in the Philippines.  A few years upon his return, he met and married his bride, Shari, in 1971.  He practiced dentistry for 48 years, both in Cutlerville and Ada, MI, where he was well-loved by his many patients who appreciated his gentle, compassionate spirit and kind smile.  His dental practice of 40 years is the second longest continuous business in Ada, a town he loved dearly. He was instrumental in starting the Ada Business Association and was honored for that commitment as the Grand Marshal of the 4th of July Parade in 2012.  Chris had a strong sense of responsibility to his community, both personally and professionally.  He participated in both “Reach Out America” and “Mobile Dentistry”, organizations where he performed dental exams for military recruits.  He was passionate about giving of his time and talents as a volunteer with the Baxter Dental Clinic, as well as participating with “Healing the Children”, where he traveled to Bolivia and Honduras to serve under privileged children.  Chris is a lifetime member of the West Michigan Dental Society, Michigan Dental Association, American Professional Practice Association and the American Dental Association, serving on many committees throughout the years. He was a devout follower of Christ who cherished his faith as a long-time member of St. Robert of Newminister Parish (Ada) where he was a member of the choir, a lector, an extraordinary minister of the Eucharist, Knights of Columbus and original member of the golf league.  He was a co-chair of the Capital Campaign Drive of St. Robert’s.  No one loved life, especially the great outdoors, more than Chris.  An enthusiastic golfer, skier, hunter, fisherman, and boater, he relished his time on the golf course, in the woods and on the water.  He was a member of Cascade Hills Country Club.  Having lived on the Thornapple River for 45 years, he was also a member of the Thornapple River Association, where he served in various positions over the years, including President.  Chris and Shari loved traveling the world, family ski vacations, and time at the beach.  A loving and devoted husband and father, Chris modeled dedication, integrity and compassion, placing God and his family above all else.  He created a magnificent example in life and in death, showing immeasurable strength, courage, and grace.  He always had a twinkle in his eye, making you feel as if you were the most important person in the world. Visitation will be Sunday, April 10 from 2-4:00 pm and 6-8:00 pm followed by a rosary service at 8 pm at O’Brien Eggebeen-Gerst Chapel, 3980 Cascade Rd. S.E., Grand Rapids.  Mass of Christian Burial will be celebrated Monday, April 11 at 11:00 am at St. Robert of Newminster Church, 6477 Ada Dr. S.E., Ada.  Rev. Leonard Sudlik presiding.  The family will receive friends and family at the church one hour prior to the service.  In lieu of flowers, memorial contributions may be made to Right to Life, Healing the Children or BeatBlindness.com.