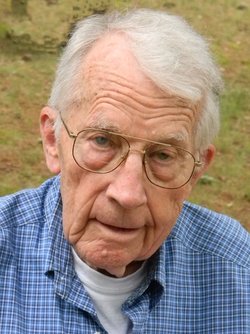 Edward Bloem Jr., age 96 of Grand Rapids, passed away Monday, August 15, 2016. Born October 9, 1919 in Grand Rapids, MI to Edward and Rena Bloem of Evergreen St. in Grand Rapids. He was preceded in death by his wife of 69 years, Dorothy J. Bloem (Costello) and sister Jane (Warren) Buekema. He is survived by his three sons, James E. (Sandy) Bloem of Arcadia, MI, Thomas J. (Cathie) of Ann Arbor, MI, and Patrick (Martha) Bloem of East Grand Rapids, MI. Ed is also survived by the light’s of his life, his grandchildren Kevin (Jenny) Bloem of Caledonia, Keri (Drew) Fulkerson of Ada, Leslie (Brian) Carion of Stillwater, MN, Jeff (Kelly) Bloem of Charlottesville, VA, Melissa Bloem and Ryan Bloem both of East Grand Rapids; also his eight great grandchildren Cohen, Brantley, Austin, Sydney, Evan, Ella, Camiran and Theo. Ed grew up in the early 20th century growth days of Grand Rapids and attended Oakdale School and spent summers with his grandmother, sister and cousins at the cottage on Blue Lake in Spencer Township, MI. He graduated from Davis Tech High School in 1938 and began work at Metal Office Furniture as a draftsman shortly after graduation where he retired from now known as Steelcase Inc. in 1985 as a Product Engineer Manager for Desk and File products. Ed was a proud U.S. Army veteran in the Corp of Engineers and served in the United States, Okinawa and Korea and was honorably discharged as a major to return to marry Dorothy, build a house on Shangrai-La Drive and raise his family. Ed was a founding member of Immaculate Heart of Mary Church and parishioner until his passing. Ed had a passion for singing Barbershop quartet and was a member of “The Cosmopolitan’s” and the Great Lakes Chorus. He also was an avid outdoorsman who loved to fish and hunt in Michigan starting as a boy with his father and uncles. He was a past member of Kent Conservation League and a member of the Lost Creek Club in Big Bay, Michigan where he and friends built a log cabin and explored and hunted the upper Michigan lands. He was also at times in his life, an avid skier, golfer, sailor and photographer. All these experiences gave him a deep treasure chest of stories that he told with great detail and passion that were a source of delight and entertainment to his family, friends, coworkers and acquaintances. He will be missed by his family and others yet will live on in our hearts and minds and we will be forever grateful to have been his family and friends and all who he was able to share a story with. The world was a better place with him in it and now heaven gets the honor. Visitation will be Wednesday 2-4:00 pm and 6-8:00 p.m. with the Rosary recited at 7:30 p.m. at O’Brien-Eggebeen-Gerst Chapel, 3980 Cascade Rd. S.E., Grand Rapids. Mass of Christian Burial will be celebrated Thursday 11:00 a.m. at Immaculate Heart of Mary, 1935 Plymouth Ave. SE, Grand Rapids, Rev. Troy Nevins presiding. Interment Resurrection Cemetery. Memorial contributions may be made to Killgoar Foundation of Immaculate Heart of Mary School, 1935 Plymouth Ave. SE, Grand Rapids, MI 49506.