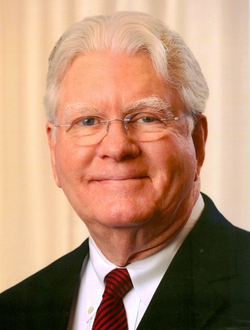 George Lee Whitfield “Poppa Georgie”, age 79, peacefully departed this life on March 13, 2017th, surrounded by his family. Born in Lake Wales, Florida, in 1938 he received his Juris Doctorate from Vanderbilt University School of Law in 1963 and practiced law at Warner Norcross & Judd for over 52 years.  There he was known as the “Dean of Employee Benefits,” and will be remembered for his tremendous kindness to others, his humble spirit, and his generosity. He received numerous accolades and awards, including Fellow of the American College of Employee Benefits Counsel in 2011, which he regarded as a great honor.  He was dedicated to his pro bono work; he was a gifted writer, a beautiful speaker, and a voracious reader. He described his work at Warner Norcross as the “fabric of my life.” George was also an Adjunct Professor at Grand Valley State University, where teaching brought him much enjoyment. Our father made a profound impact through his gentleness, his eccentricity, and the warmth he brought to any situation.  His unassuming demeanor belied a deep sensitivity. He saw beauty in so much of the world around him, and he had a curiosity and wonderment that kept his soul vibrant into his later years.  Aviation fascinated him and he followed the Blue Angels for decades. He was a great lover of music: seeing Leonard Cohen, Lyle Lovett, Greensky Bluegrass, and many others were lifetime highlights. He had fond memories of an idyllic childhood in central Florida, spending his days water skiing on Crooked Lake.  His passion for water skiing lives on in the many friends and family he taught throughout the years. We will dearly miss his sweetness, and the quiet ways in which he inspired us all.

George was preceded in death by his son, John. He is survived by his wife, Anita; his sister Sally (Victor Miranda), his children Elizabeth Whitfield, Susie and Robert Bodnar, Sky Atwood, Aaron and Rosalba Atwood, Wendy Whitfield, George Lee and Molly Whitfield, and eight grandchildren Preston, Barrett, Sydnie, Bella, Sofia, Roan, Claire Ruby, and her new soon-to-be-born baby sister. A memorial service will be held at a later date. In lieu of flowers donations can be made to the Mackenzie’s Animal Sanctuary, 8935 Thompson Rd., Lake Odessa, MI 48849.