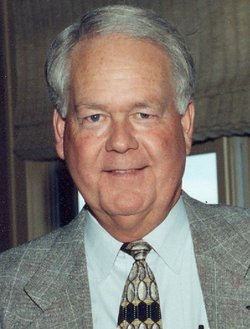 “Tam”, as he was affectionately known was welcomed home to heaven Saturday June 17, 2017 to join his parents Harold and Esther Tamblin, granddaughter Courtney Clark and other family members who have gone on before him.  We will miss Tam’s daily stock market updates, his jokes, the sounds of the crazy “Ka-doo bird”, hearing him exclaim, “I love it!” after a shared story, his laugh and smile. However, rest assured if asked today how he was doing; in classic Tam style he would respond, “never better!”

Tam was born and raised in Grand Rapids.  After graduating from Michigan State in 1961 he began his insurance career with Hartford Insurance as a casualty underwriter, then moved on to Travelers Insurance as a special field agent before beginning his own business as an independent insurance agent. In 1974 and then again in 1991 Tam merged his agency with other agencies to form Buiten Tamblin Steensma Insurance Agency.  He took great pride in his business but even more so truly relished the friends made throughout his career. Tam was always ready to lend a helping hand as a member of the Downtown Lions Club where he served on the board and chaired the Seeing-Eye Dog Program, was a member of the Economics Club, and a member of the Michigan Trails Girl Scout Council where he served on the finance committee.  As an avid golfer Tam was a longtime member of Cascade Hills Country Club and Silver Lake Country Club where he enjoyed his free time “hitting the little white ball”. Tam’s life was a life well lived.  His easy going charismatic nature, ever present optimism, sense of humor, kindness and caring for those around him even throughout his battle with Parkinson’s and Lewy Body Dementia are a testament to why he was loved so by all that had the privilege to know him.

The family would like to express their sincere gratitude to the wonderful staff at StoryPoint in Rockford and Spectrum Health Hospice. Their incredible compassion, dedication and effort to provide quality care over the last months were not only heartwarming but a blessing.  Per Tam’s request cremation has taken place.  A service to celebrate Tam’s life will be held on Friday *** JULY 28, 2017*** at 11:00 a.m. at O’Brien-Eggebeen-Gerst Chapel, 3980 Cascade Rd. S.E., Grand Rapids. Pastor Kurt Dillinger officiating. The family will greet guests one hour prior to the service.  In lieu of flowers, we respectfully suggest donations to Parkinson’s Association West Michigan, 260 Jefferson, Ste. 210, Grand Rapids, MI 49503; VanAndel Institute, 333 Bostwick Ave., Grand Rapids, MI 49503; or Alzheimer’s Association Greater Michigan, 25200 Telegraph Rd., Ste. #100, Southfield, Michigan 48033.