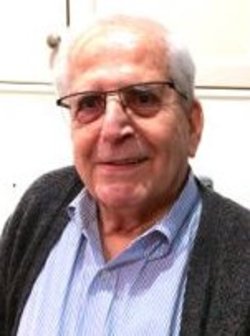 He is survived by his son Martin (Michele) of Grand Rapids, Michigan; daughter Lisa Zwick (Michael) of Akron, Ohio; grandchildren Shawn Zwick (Chelsea), Kaley, Kimberly Zwick, Alexis, Julia, Alexandria and Josh Kuiper; great-granddaughters Quinn and Evie Zwick; and many other cherished relatives and friends who will miss his gentle manner and loving concern for them.

Joseph was a U.S. Navy veteran, serving active duty during WWII. He lived and raised his family in Shaker Heights, Ohio, where he was a grocer for over 30 years for a specialty food store. In his retirement, Joseph became a part-time salesman for Akron Cotton Products, Inc.

A memorial service will be held on Saturday, July 8, 2017 at 9:30 a.m. at the Chapel in Green, located at 1800 Raber Road in Uniontown Ohio, 44685. In lieu of flowers, the family requests that donations be made to Hospice of Michigan, 989 Spaulding Ave. SE, Ada, MI 49301 or Keystone Community Church, 655 Spaulding Ave SE, Ada, MI 49301. Arrangements by O’Brien-Eggebeen-Gerst Funeral Home www.gerstfuneralhomes.com