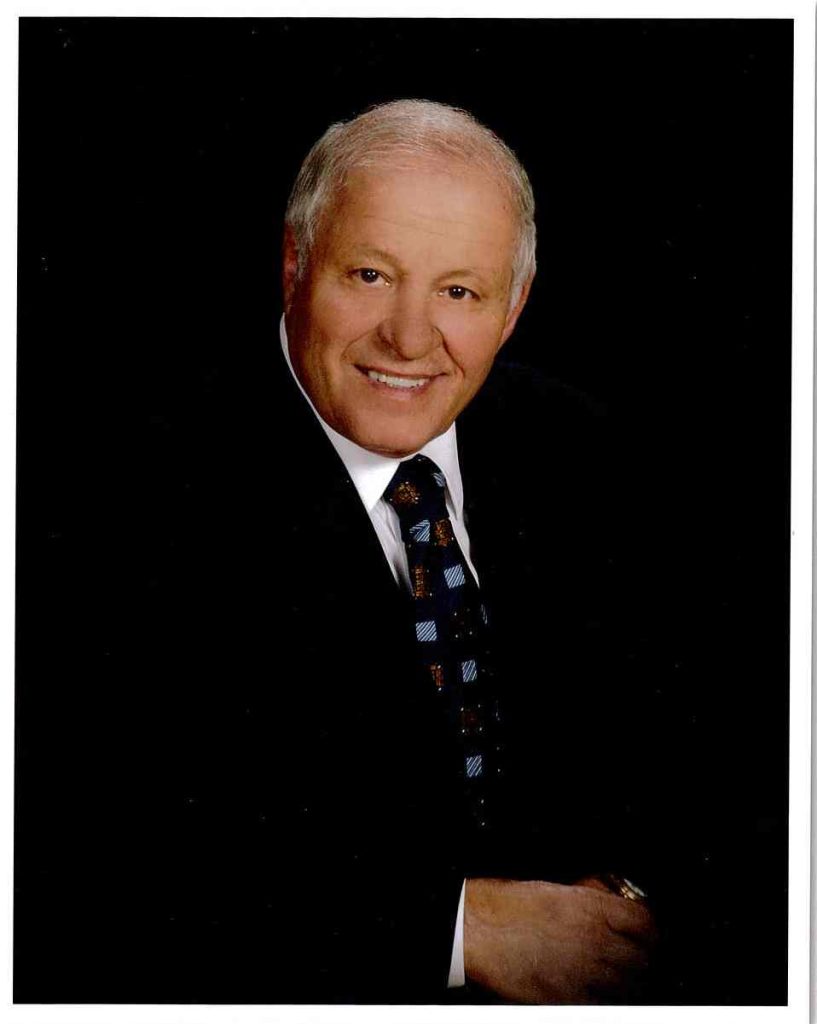 Peter Paul Renucci, 81, well-known businessman and philanthropist, whose generosity, enthusiasm and love of faith, family, friends, country and community have positively touched thousands of lives in the West Michigan community and beyond, died peacefully at home, on Sunday, September 15, surrounded by members of his beloved family.

Peter is survived by his wife of 55 years, Patricia Rose Renucci, who said of her husband, “Peter lived his life to the fullest. He did everything he wanted to do, but would have done more if he had had more time. I am deeply grateful for the life we shared together. We were a great team.”

Born Piero Paolo Renucci on Palm Sunday, April 10, 1938, in Barga, Lucca, Italy, Peter carried memories all his life of seeing American tanks parked next to his house, and hearing missiles exploding throughout the night near his home following the Allied invasion of Italy in WWII. He came to the United States in 1960 as a tourist to visit his older brother who lived in Chicago. Peter admired the United States so much, he decided to stay and applied for a student visa and enrolled in school, quickly learning English.

Peter and Pat met in Chicago in 1963, where they were married on September 20, 1964, and where Peter completed his schooling that same year. After graduating from the American Academy of Medical Technology as a medical technologist and x-ray technician, and completing a course in auto analyzer techniques at the Technician Educational Center, he worked at Universal Labs, a private, medical laboratory also in Chicago. But his dream was to someday own his own company.

In 1965, he and Pat moved to Grand Rapids, Michigan, where his dream came true. There, he and Charles E. Enright co-founded Continental Bio-Clinical Laboratory Service, Inc., locally known as CBC Laboratory. Three years later, he proudly became a citizen of the United States of America.

When CBC Laboratories first opened for business, they had three employees. When the business was sold in 1991, they had 600 employees and six locations throughout the Midwest providing faster transfer of specimens from physicians’ offices to the lab for faster diagnosis. Except for 5 p.m. Saturday and 10 p.m. Sunday, CBC was a 24-hour daily operation.

Up until months before his death, Peter remained active in West Michigan organizations, institutions and charities he supported faithfully throughout his business career and beyond. Among those he and Pat supported with time, talent and financial giving were: Spectrum Health Hospitals including Helen DeVos Children’s Hospital, Butterworth Hospital and the Cherry Street Clinic, and the Fred and Lena Meijer Heart Center; Grand Valley State University; the Grand Rapids Art Museum; the Michigan Chapter of the Arthritis Foundation; Opera Grand Rapids; Mary Free Bed Rehabilitation Hospital; St. John’s Home; Grand Rapids Symphony; Frederik Meijer Gardens & Sculpture Park; and St. Robert of Newminster Catholic Church in Ada. Awards and recognitions presented to Peter over the years for leadership roles he willingly and enthusiastically assumed, including fundraising, are many.

In 2001, Peter was honored by the Blodgett Butterworth Healthcare Foundation with The Art of Giving Award for his dedication to the true meaning of philanthropy. In 2013, he received the honorable status of Trustee Emeritus from the Spectrum Health Foundation for his many years of service as Board member of Spectrum Health and Helen DeVos Children’s Hospital foundations.

Peter and Pat were inaugural donors to The Richard McNamara Cardiovascular Fellowship Program at Spectrum Health Fred and Lena Meijer Heart Center that opened in 2004.

For 18 years, Peter chaired the Spectrum Health Gala Fundraising Committee, a role he especially enjoyed. Every year at the beginning of the first meeting, he’d pull out of his pocket a $1 bill, put it on the table and say, “We’re off to a good start.” Committee members loved Peter’s unwavering enthusiasm. His greatest joy came later when he’d have the honor of presenting a check for the proceeds to whatever promising new lifesaving or life-changing program or service was being highlighted each year as the beneficiary.

Peter was also a longtime and faithful friend and fan of Grand Valley State University. He absolutely loved the Lakers football team. He looked forward to every new season and rarely missed a game. He never went anywhere without wearing his GVSU baseball cap—whether all over the world or out to dinner in Grand Rapids or in Florida. Pat said she and Peter were always amazed by the number of alumni they met on their travels as well as here at home who were equally enthusiastic and generous supporters of GVSU.

During his nearly 20-year tenure on the Grand Valley State University Foundation Board, Peter made numerous generous contributions in his and Pat’s name including two major gifts to assist in the construction of two downtown health sciences buildings. The couple also became charter members and ongoing supporters of the Friends of Alten Society at GVSU, donating three Mathias Alten paintings to the Alten Society’s permanent collection at the George and Barbara Gordon Gallery at GVSU. In addition, they established both the Peter P. Renucci Family Medical Lab Sciences Scholarship and the Peter P. and Patricia R. Renucci Medical Lab Sciences Scholarship. Pat said one of the most heartwarming gifts they made was to the GVSU Music Department for the purchase of their new Steinway piano.

On April 30, 2016, during GVSU’s Commencement Ceremony, Peter, then owner of E&R Investments, received an Honorary Doctor of Public Service degree in appreciation for his years of dedicated and generous service.

Before emigrating to America, Peter grew up playing soccer. He eventually became a professional major league player on a team from Pisa, competing all over Italy. While living in Chicago, he played with an All-Star team that competed with teams from throughout the U.S. and Europe. When he and Pat moved to Grand Rapids in 1965, Peter first played with the Grand Rapids Comets, later joining the Wyoming Be-Quicks until his early 40s. In his younger years playing soccer, he was called “The Mosquito” because of his innate ability to run exceptionally fast.

Realizing soccer wouldn’t become a major sport in the U.S. unless children grew up playing it, he collaborated with the Grand Rapids YMCA and Forest Hills Central High School where his two sons, Paul and John, were students, to establish their first soccer programs for kids. Soccer, he said, “doesn’t require a lot of expensive equipment, and is a great sport for kids not big enough to play football or tall enough to play basketball.”

Throughout Peter’s soccer career, his jersey number was No. 7. Today, Sophia, his oldest granddaughter who started playing soccer when she was very young, is also an outstanding soccer player. Her jersey number is No. 7, just like Grandpa Peter’s, which made him very pleased and proud, as well.

Peter also loved golf. He enjoyed a low handicap and was admired for his 30-foot putts. He was proud and pleased to recently bequeath his famous putter to his 12-year-old granddaughter, Johanna, now a passionate and promising golfer herself.

Peter’s other hobbies and interests included tennis, hunting game birds and deer, his koi pond, gardening, collecting and refinishing antique furniture, collecting and restoring a fleet of classic cars, playing gin rummy with his golfing buddies at Cascade Country Club, and cooking and eating homemade Italian pasta. He proudly told his grandkids, “I make a very, very good clam sauce that’s so good, Grandma says I cook better than she does.”

Peter loved listening to Italian opera. In 2008, he made a major gift to assist in the construction of the Betty Van Andel Opera Center in Grand Rapids.

While Peter loved life and his many interests and activities, his greatest love was for his family. Grandpa Peter once wrote to his grandkids: “The happiest days of my life were when your grandma and I were married, when your dad (Paul Brian Renucci) was born, and when your Uncle John (John David Renucci, M.D.) was born. I didn’t think I could be any happier, and then six miracles happened: Luca, Sophie, Peter, Ella, Johanna and Alexandra were born. Now, I am happiest when our entire family is celebrating, playing, traveling, and having fun together.”

When young Peter Michael Renucci was in the fourth grade, he wrote an essay titled, My Hero, concluding with, “My grandpa is my hero because he will always try his hardest to make an impact on our lives, and there is no way he will stop himself from getting up, and trying again. He taught me that I had to put other people’s needs in front of mine. Just like what he does, and that is why I love him.”

Peter and Pat have been active parish members of  St. Robert of Newminster Catholic Church in Ada, since 1965, when they first came to Grand Rapids. Their major gifts to St. Roberts included capital fund drives for two parish churches. In 1998, they funded the designing, manufacturing and installation of the Stations of the Cross in the current parish church.

A Mass of Christian Burial for Peter will be held on Friday, September 20 at St. Robert of Newminster Catholic Church at 6477 Ada Drive, SE, Ada, MI 49301, at 11AM, with Father Leonard Sudlik officiating.