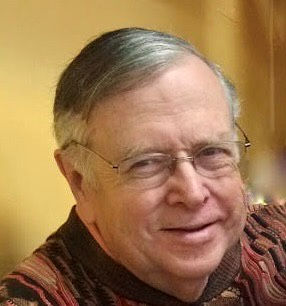 Robert J. Riley of 2416 Okemos Dr. SE, Grand Rapids passed away at his home after a two-year health struggle at age 76 on May 3, 2022. Bob was born on September 9, 1945, in La Plata, Maryland, to Morris Albert Riley and Mae Ellen Brown and was raised in Lansing, Michigan. After graduating from the Cranbrook School, he attended Michigan State University and graduated with a Bachelor of Arts degree in Anthropology. He then obtained a Juris Doctorate degree from the University of Detroit School of Law. Bob was married to Patricia Gayle Warner on September 6, 1969, in East Lansing, Michigan. He was in the United States Army Reserves from 1966 until his Honorable Discharge in 1972. Bob and Pat moved to Grand Rapids in 1975 and were members of Immaculate Heart of Mary Catholic Church. Bob was preceded in death by his parents, his wife, Pat, and an infant son, Michael. Bob is survived by his children, Jessica (Jorge), Neal (Erika), Livia (Alfredo), and Kevin, and his grandchildren Roman, Caspar, and Benji, and younger sisters, Janet and Roxanne, and close family Becky and Glenna. Three of Bob’s surviving children live in Grand Rapids, while Livia lives in Portland, Oregon.

Bob practiced law in Grand Rapids starting in 1975, retiring in 2014. He specialized in appellate law and was particularly skilled in legal research and oral argument. He was an avid reader and talented writer. He loved sports and spent time as a track coach when his children were young. He spent long hours perfecting his Fantasy Basketball team and he never missed an NFL draft. He was a storyteller and usually had a captive audience. He enjoyed spending time with his family traveling to Disney World, driving to track meets and hockey games, and being available at a moment’s notice to pick up his children in Wisconsin and Ann Arbor. Politics was another passion and Bob could be found analyzing the latest election or debating the issues of the day. Bob will be dearly missed by family and friends.

There will be a visitation and funeral service at O’Brien-Gerst Chapel, 3980 Cascade Road SE, Grand Rapids, on Tuesday, May 10, 2022. Visitation will be from 11:00 a.m. to 1:00 p.m. with a funeral service to follow at 1:00 p.m. Pastor Norvie Cottingham will preside over the funeral service with internment at Woodlawn Cemetery following the funeral service. In lieu of a luncheon or gathering after the funeral, there will be a celebration of life at the family home on Sunday, June 12, 2022, from 1:00 p.m. – 4:00 p.m. The family wishes to share sincere thanks and gratitude to the staff at Interim Hospice who attended to Bob at the end of his life. They made a difficult situation tolerable and there are no finer people anywhere. If anyone would like to make a memorial contribution, please consider Bob’s favorite charity, Doctors Without Borders, www.doctorswithoutborders.org.